10-Prince Nymph is a classic Montana fly pattern. The prince started life as the Brown Forked tail designed by Doug Prince, somewhere in the 1930s. Over the years it has morphed into what it is today. It’s basically the same bug but with a bead head. The Prince is a great imitation for stoneflies and fatter mayflies. Next time you’re looking for a Montana fly pattern grab a few Prince Nymphs. 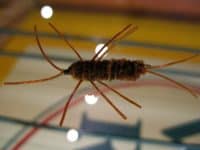 9-Girdle Bug is another must have Montana fly pattern. The freestone rivers of Montana are full of large stoneflies and every single freestone river in Montana has some in it. Lots of legs, chenille on a size 6 3XL hook and you have a Girdle Bug. I tie them big and small, beaded and non beaded. I’m a big fan of black and brown Girdle bugs. Run a girdle bug under a big chubby or under a bobber and you’ll catch fish! 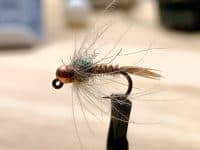 8-Pheasant Tail Nymph is another great Montana fly pattern. You can get them in every size to imitate every mayfly on the planet. There are so many variations of the PT but you can go with a classic PT on a curved hook with a tungsten bead and you’re in the game. How about a PT tied on a jig hook? They work great! I’m a big fan of how they ride hook up keeping from getting snagged on the bottom. Also, that hook up seems to have a better hook up ration than the normal style hook. Under a bobber or under a dry fly… Next time you’re scratching your head go to the PT!

7-Parachute Adams is another classic Montana fly pattern. You could say it’s the Pheasant Tail of the dry fly world. There is a parachute Adams for every mayfly on the planet. Fish it to match the hatch or just blind fish it and it’ll get eaten! Not seeing mayflies on the water? That’s ok, tie it on and blind fish it with confidence. Scared to fish a single Adams? Put it on about two and a half feet behind a Chubby, fish a double dry fly rig and roll.

6- Ants are a sneaky must have Montana fly pattern. Ants are often underestimated in Montana. Big Brown Trout love to eat ants. Big ones, little ones, parachute ones or elk winged ones. Some of my favorite colors are black, amber and purple. I will mostly use them as a dry fly but sometimes when it sinks it’s a bit more effective. If they are wanting it subsurface then drop it behind a larger dry fly.

A Gold Standard Montana Fly Pattern is on that I would not go out on the water without. Must haves…

5-CDC Caddis is a must have Montana fly pattern. If you’re a tailwater guy then you must have this bug in your box. Caddis are prolific on tailwaters throughout the state and it would be a good idea to have a few. Not just the live ones but also the dead ones. The CDC Caddis is my most productive dead caddis fly. Tie up or grab a few and fish them to fish keyed in on caddis. A CDC Caddis is a Gold Standard Montana Fly Pattern.

3- Purple Haze is a standard Montana fly pattern. You gotta have it in your fly box. It’s a purple parachute dry fly that just plain gets eaten. Some think that the Purple Haze is not that great, I was one of those until I saw the magic! It’s not always there but when it is… It is on! Big ones and little ones they work for every mayfly out there. If you’re a Parachute Adams guy and they aren’t working anymore, switch over to the purple one and I bet you’ll start to get eats again. The Purple Haze is a classic Montana fly pattern.

2-San Juan Worm is a classic Gold Standard Montana Fly Pattern. Say what you will about worms but they catch fish… Everywhere and on most days of the year. Lots of times when I’m scratching my head and none of my stuff is working I go to the worm. Red ones, pink ones, purple ones, chartreuse ones as long as it’s a worm.

1-Chubby Chernobyl is hands down the Gold Standard Montana Fly Pattern. I think there are more Chubbys living in fly shop bins than people in the whole state. Once again… Say what you will but fish love the Chubby! Big ones, small ones, purple ones, royal ones or red ones they all catch fish. That big profile matches so many stoneflies, hoppers, October caddis, and even the little ones are not too far off of caddis and beetles.

If I had to pick two of these patterns to fish all year long in Montana I would go with a San Juan Worm dropped off a Chubby. Run that worm about 4 feet below the Chubby and you have a great set up that will cover lots of different water and catch lots of fish. You could even fish the worm way longer off the Chubby in the colder months and still catch fish. Classic Montana fly pattern right there.
Where do I get most of my flies? I do most of my own tying. After every day on the water, I have ideas about the flies I used that day… Maybe if that fly looked a little different it would have worked better. Maybe smaller or bigger. Then I tie up a few bugs based on these ideas, but there are times when I have to buy flies. Most fly shops have a great selection of quality flies.