The Last Best Place… To fish, but what is the best fly fishing season Montana has to offer? It’s been a long cold winter and old man winter is starting to lose his grip. The air smells a bit different, you hear a bird chirp, maybe some snow geese flying north and that big orange orb in the sky starts to put off some heat. Spring is in the air and you’re itching to go fishing!

As a general rule, March is the start of the fly fishing season Montana. March can be a wild card but it can also be soooo gooood… You’ll still get some bad weather days but you’ll also get those 50 degree days with no wind or clouds. Spring fly fishing season Montana is not to be missed! Water temps have started to move above 34 degrees, the first bugs of the season begin to move around and the fish are ready to eat after a long run of cold water and not much bug activity. Freestone rivers start to wake up and tailwaters are producing great days. So where do you start? Let’s start with bug activity… Midges begin to move around and can produce some great dry fly fishing. Let’s take the Missouri River for example. Some years the midge activity can produce some great spring dry fly fishing. Some years it’s nonexistent. Some years it’s somewhere in-between. Just like March and April, it can be a wild card. Some more bugs that are active in the spring fly fishing season Montana are Baetis. Or as most like to call them, BWO’s. These guys usually make an appearance when the water temps start to move over the 43-degree mark. When that water hits 41-42 I start to prepare for rising fish and some years they appear but some years it takes a few more degrees of warmth to get them to pop. 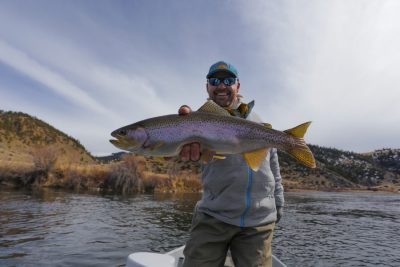 The next bug of the spring fly fishing season Montana to think about is the good old March Brown. The emergence of the March Brown means that spring is here! Size 14 fat brown mayflies with mottled wings are what you’re looking for. It’s also what the trout are looking for. If you see these guys on the water It’s time to tie on a dry fly. Freestone rivers it’s a good idea to blind fish even if you’re not seeing rising fish. On tailwaters, You are probably going to see heads up and you can hunt down the big ones and sight fish them. Last year the Missouri River had an epic March Brown event that lasted probably two weeks. It was pretty stupid good with fish chowing just about anything you put over their heads.
What does the spring fly fishing season Montana have for the streamer Junky? Tugs, that’s what! Spring is probably my favorite time of year to chase big brown trout with streamers. While the rainbows are thinking like trout, Brown Trout are thinking like the Char they are! They want to kill something and eat it! We all know streamer fishing is not a slam dunk but the Spring fly fishing season Montana has to offer is a high percentage time to target those killers with a streamer rod. I can write a book on streamer fishing so I’ll keep it short, this time… Don’t be afraid to break out that streamer rod this spring!
As the days get longer, when the sun warms your soul a bit quicker, the rains of spring fade away and spring loses it’s grip to the next fly fishing season Montana.

Summer fly fishing season Montana is what books and movies are made of! You know the one I’m talking about. Does it get any better? Warm days, sunshine, lots of cold water, Bugs and hungry trout? And they like to eat dry flies? And they’ll eat them? Where is this place you speak of? Montana! Floating down the river, blind fishing a dry fly and catching fish is with the summer fly fishing season Montana is all about! On freestone rivers, PMD’s are the big players in the mayfly world. Trout stacked up in riffles, porpoising on hatching PMD’s is not to be missed. PMD activity usually lasts until the third week of July, sometimes a bit longer and sometimes a bit shorter. If you are lucky enough to have Trico’s around you’ll have more dry fly fishing through July and maybe early August. The summer fly fishing season Montana continues with terrestrials after the PMD’s and Trico’s leave the party. Hoppers, ants, and beetles are next. These guys become a player sometime in August. Some years hoppers can be prolific and some years not so much. 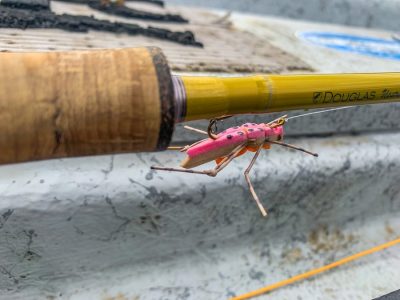 Why is that? A cold rainy spring can keep numbers low, ranchers using pesticides to protect their crops can also kill off hopper numbers. There are so many variables at play in the hopper world. Some rivers love the hopper and some rivers really don’t care much about the hopper. So for these rivers, the ant usually fills the gap. I love it when the fish in the Flathead river are keyed in on ants and it’s such a fun day on the water when this happens. Some days it seems like every fish in the river is looking for an ant and will eat just about any ant that you put over their heads.
All of a sudden the days seem to get a bit shorter, the angle of the sun seems off and maybe there is a bit of chill in the morning air, Summer gives way to the next fly fishing season Montana.

The dog days of August are behind us and things are starting to get better! As the saying goes, It gets better in September! Water temps start to drop, a new round of bugs starts to move and the fish are starting to eat with more authority. So what’s on the menu? Hoppers are often overlooked in the fall. They are as big as a hopper would ever get, windy afternoons happen a bit more often and these guys get blown in the river and are easy meals. These days don’t always happen but here are a few clues. Hoppers are not very active in the cold mornings of the fall fly fishing season Montana but when the sun warms the air things start to change. Listen for that telltale sign of there clicking. You can hear them clicking along most banks! Sometimes they are so loud they sound like rattlesnakes. 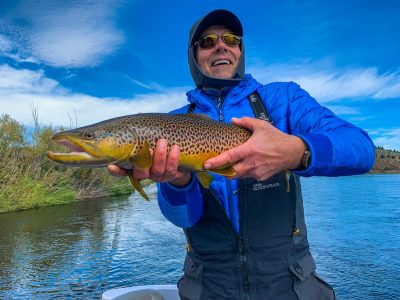 Once those guys get moving it might be time to throw on the good old Morrish hopper! Windy days are another clue, lookout in the middle of the river. What are you looking for? Something about 4” long spinning around in circles on top of the water. When hoppers are on the water they typically stand out pretty good. Sort of like a beacon, to guide your way to Hopper Chug Madness! Mahogany duns are up next. When you see your first Mahag, it marks the beginning of the fall fly fishing season Montana. You can no longer pretend it’s summer! Size 16 little dark brown mayflies are what you’re looking for. A simple Purple Haze or a Parachute Adams works great when they are around. How about the good old Parachute PT Cripple? Yup, that guy gets chugged too! October Caddis? Yes sir! They are around and we’ll save this subject for another blog post this fall. Golden Chubbies or orange stimulators fit the bill.
All of a sudden it’s really cold out. No more flip flop days in the boat, the sun is really low in the sky, maybe your boots are frozen in the morning. Fall gives way to the next fly fishing season Montana. 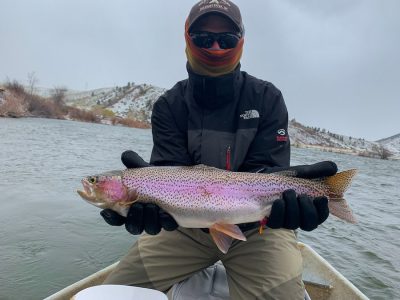 While most are thinking about skiing or other snow activities there are still some great days of fishing to be had. Early winter of the fly fishing season Montana has some great Trout Spey fishing. As water temps start to really drop fish move into a bit slower water that is perfect for the Trout Spey Game. Deep runs and insides start to produce good numbers of fish. Nymphing is a solid choice. While some fish might still eat a dry most are not moving that much for a meal on top.

So when is the best fly fishing season Montana has to offer? Whenever you can get out here is what I always say! From spring through winter, Montana is truly the Last Best Place… To fish!